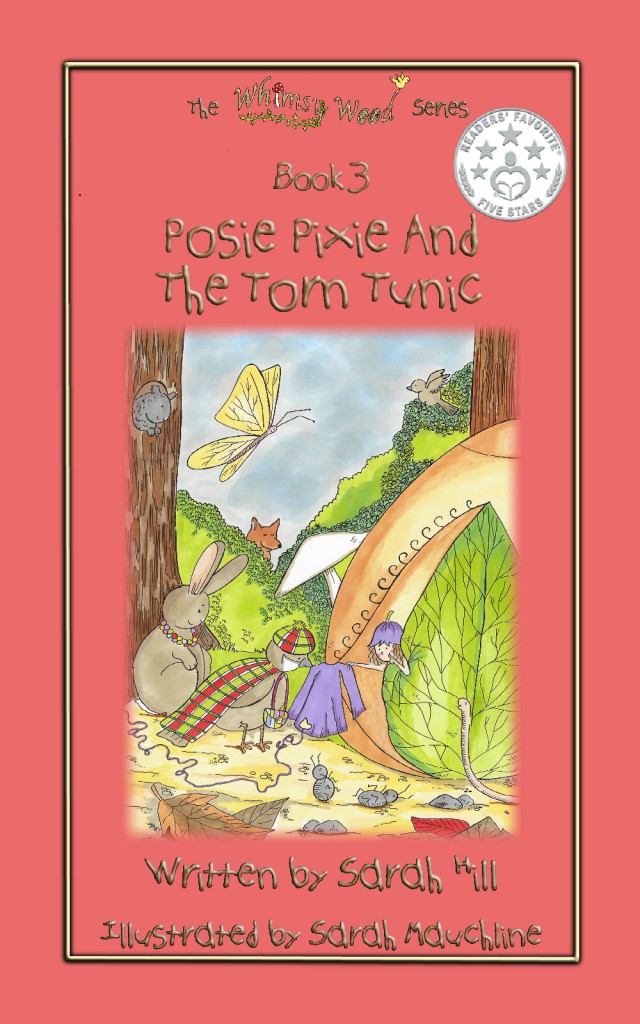 This third book in the wondrous Whimsy Wood series is written for the month of October, (book 2 being for September and book 1 for August). With this in mind, 'Posie Pixie And The Torn Tunic' is brimming with blackberries, beech nuts and all things autumnal!

You’ll meet a team of naughty ants, along with Whimsy Wood's very own Scottish seamstress, Mrs Spottisdowne the sparrow. Raspberry Rabbit also makes an appearance, having first been introduced to Whimsy Wood readers in book 2, 'Posie Pixie And The Lost Matchbox'. If you’re looking for a delightful autumn children’s book, then this is it!

The Readers' Favourite 5-Star Seal Awarded to book 3, 'Posie Pixie And The Torn Tunic' in 2015.

‘...Before long, Posie had reached the blackberry bushes by the woodland's edge. She put her baskets down on a nearby moss-covered log and undid the buttons on her rose-hip hooded coat, while she decided where to start picking.

Out of the corner of her eye, she saw the baskets rise up a little and then move slowly along the log all by themselves...

"That's strange," muttered Posie to herself. I've heard of flying broomsticks, but floating baskets is just silly! So brushing down her purple tunic and drawing herself up as tall as possible, she marched over to the naughty baskets with her hands on her hips.

"Now look here!" she said firmly, whilst waggling a finger at them. "I've carried you to this lovely spot by the blackberry bushes, so the least you could do is sit still!" And with that, she lifted the baskets up swiftly by their handles.

Well, you'll never guess what she saw underneath? A team of teeny tiny ants!

"Conkers and crab apples!" Posie said in amazement, as she stared at the dinky insects." I thought my baskets were floating by themselves, but you little ones were carrying them away!"...' 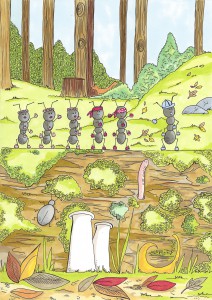 "I love the Posie Pixie books! I really liked reading about the nature in the forest and the colours that you can find there."

"This engaging tale of the Whimsy Wood folk and their merry antics, will enchant children and transport them into the world of make-believe!"

Buy it directly from the publisher:-

Posie Pixie And The Torn Tunic