Posie is the main character for the first seven ‘Whimsy Wood’ books and she returns again for the third set of seven books. Posie is indeed a loveable character and she is also terribly persistent! She appeared in my head, all by her little self and without asking may I add! Mind you, without her sudden appearance into my life, there would have been no Whimsy Wood Series at all! 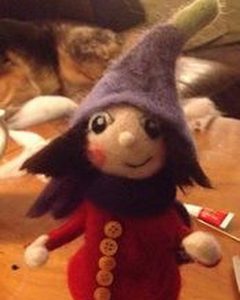 Posie Pixie looks very pleased with herself! I wonder what she’s been up to?! 😃📚✨

Posie is rather fond of the colour purple, as you can see by her purple pixie boots, leggings and tunic .  She’s also rarely seen without wearing her jingling, tinkling bluebell hat! As for her character, well she’s helpful and kind, funny and giggly. She can also be a little forgetful and her favourite phrase is, “Okey cokey!”

Now Posie is fortunate enough to have a best friend, in the form of ‘Wibble Woodlouse’ who she meets in book 2, ‘Posie Pixie And The Lost Matchbox’. Wibble has a very dry sense of humour and at times despairs with Posie’s forgetfulness. Wibble lives with Posie in her copper kettle house and likes to wear a tiny pink flower on her head at all times! 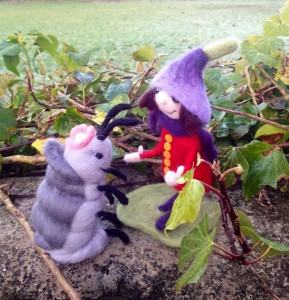 Wibble is not quite as adventurous as Posie. She’s a creature of comfort and in her little woodlouse mind, why venture outside where it might be chilly, when you could curl up by a toasty pixie stove and keep cosy and warm?! Incidentally, incase you were unaware, you’ll notice that Wibble communicates in squeaks, for this is the natural language of woodlice everywhere of course….

Raspberry is a wonderfully loveable character. She is lots of fun and wears bright red flowery flip-flops on her pale brown fluffy feet and numerous colourful beads around her neck, which jingle and jangle about. 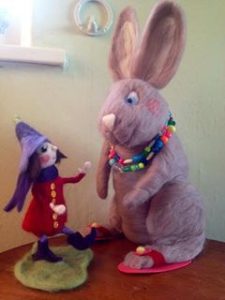 Raspberry’s telling Posie about her latest ‘finds’ in Whimsy Wood! 😃📚✨

She lives in a burrow near The Woodland Store and collects things that have been discarded in the wood which she can re-use and recycle. For example, did you know that Raspberry uses sweetie wrappers to wallpaper her burrow? Ingenious!

Mrs Scarlet runs Whimsy Wood’s Woodland Store and she’s very tidy and organised. She insists that the woodland folk wipe their feet or paws on the store’s doormat, or she’ll follow them with a beech broom, sweeping the floor behind them as they walk! 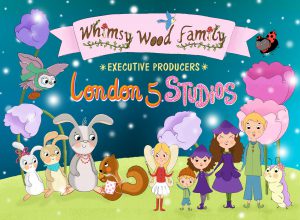 Mrs Scarlet wears half-moon glasses and her shop apron when working in the store. She likes to keep up-to-date with the Whimsy Wood news, so she avidly reads the weekly Whimsy Wood leaf-paper from cover to cover. Finally, she’s one of the slightly more serious and older residents in Whimsy Wood.

Mrs Spottisdowne is Whimsy Wood’s Scottish seamstress and singing teacher. I don’t know why she’s Scottish, she just is! When I read ‘Posie Pixie And The Torn Tunic’ in schools, or at other similar public events, I try to think of the wonderful Robin William’s ‘Mrs Doubtfire’, to help achieve Mrs Spottisdowne’s accent. I’m sure I really don’t do it justice!

Mrs Spottisdowne is rarely seen without her tartan hat or cloak and often flies about Whimsy Wood, with her striped sewing bag hanging around her neck and holding various mended garments in her beak or feet!

Mr Bilberry is Whimsy Wood’s ever reliable postman. The job of postman has been in his family for generations and he wears his black shiny postman’s cap with pride. This cap too, I hasten to add, was his father’s and his father’s before that. He is terribly proud of his job and no postal delivery is too small, or indeed too tricky, for good old Mr Bilberry.

Unfortunately, Mr Bilberry doesn’t have any children of his own, so I’m not sure what will happen to this wonderful postal service in Whimsy Wood when Mr Bilberry becomes too old to carry out his postal duties. We’ll just have to wait and see….

Bromley is Whimsy Wood’s very own ‘party animal’! He is a very friendly and sociable chap who loves a good party and is often spotted wearing a party hat, or holding a balloon! Whenever you meet him in one of the Whimsy Wood books, he is usually going to, or coming home from a party.

You see, I’m rather fond of badgers and I’ve always thought it such a shame, that badgers are often portrayed as grumpy creatures. Taking their nocturnal behaviour into account, what better character to have than a party-loving badger?!

MR AND MRS DUSTY THE DORMICE AND THEIR SIX LITTLE ONES

This charming family of dormice come from the splendid county of Somerset and Mrs Dusty is constantly run ragged with looking after their six children! There’s Dolly, Daisy and Dora. Dolly being their oldest daughter. Then there’s the twin boys, Dingle and Dexter and finally Dillon, the youngest member of this furry family.

Meet Whimsy Wood’s ‘tom-boy’! There’s nothing Florence likes better than a laugh and a joke! She’s certainly a happy kind of fox. She’s also very practical and always lend a helping paw. She also happens to have a rather wise head on her young shoulders. In book 12, she teaches a certain moth a very valuable lesson about ‘not judging a book by its cover’…..

Sonny is a cool, easy going, ‘surf-type’ kind of dude. Whatever the weather, he’ll be wearing shorts of some description and his trusty blue baseball boots. He often likes to say, “For sure!” along with other laid-back lingo! His best friend is Violet Vole.

Violet can be a bit of a worrier, but she will often try to overcome her worries or fears to have fun. She wears a snowdrop skirt (rather like Fearne Fairy) and is quite girly. Her best friend is Sonny Shrew.

Dr Tussle is always at hand to look after the Whimsy Wood folk when they are poorly. Like Mrs Scarlet the squirrel, he is a little more serious than the rest of the woodland folk and is one of the older members of the Whimsy Wood community.

He makes his first appearance in book 7, ‘Posie Pixie And The Pancakes’, as Posie and Wibble find themselves feeling rather sick….!

Fearne makes her first appearance in book 8, ‘Fearne Fairy And The Dandelion Clocks’. She remains the main character for the whole of set 2 in the Whimsy Wood series (books 8 – 14).

I didn’t want Fearne to be your typical pink and sparkly fairy, so she has flaws just like the rest of us. For example, she can fly beautifully but is entirely hopeless at landing! She also loves to sing, but her singing voice is pretty tuneless and rather painful on the ears! The woodland folk don’t have the heart to tell her this, as she’s a rather kind and lovely fairy and they know how much she loves singing. Instead, they stuff their paws or antennae in their ears, if she happens to be singing in the wood!

Fearne always wears her straw-coloured hair in plaits, along with a decorative daisy or two on her head somewhere. She likes wearing a snowdrop skirt (just like Violet Vole), as well as her red and white striped tights and red, frilly fairy boots.

Fearne does have a best friend, but I can’t tell you about that, as this funny character hasn’t appeared just yet in the Whimsy Wood series! 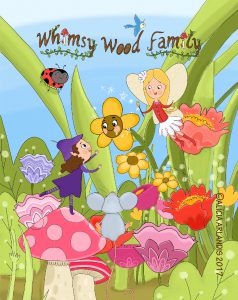